Jalil, the head of the opposition National Transitional Council (NTC), announced a reward for Gaddafi’s capture of 2m Libyan dinars (£1m), funded by a businessman in Benghazi, and an amnesty for past crimes for anyone in his entourage who killed or detained Gaddafi . It’s a very good strategy for finding the savage Gaddafi. “There are so many rat holes in Tripoli. We are searching for Gaffadi in the holes ,” NTC military spokesman, told AP. The media reported: “Despite mass defections in Tripoli and around the world, the dictator was also still being supported by a handful of others outside his immediate family, most vocally by Moussa Ibrahim, the smooth-talking information minister. On Wednesday Ibrahim was not giving speeches from a podium in the Rixos hotel but down a crackling phone line to Syrian TV [!!!] , insisting the regime could continue fighting for the capital “not only for months but for years”. He added: “Tripoli is not all of Libya. We still have tens of cities under our control.” Asked by British Channel 4 if a negotiated settlement or safe passage for Gaddafi from Libya were still possible, one of opposition leader said: “It looks like things have passed this kind of solution.” “We will invite everyone carrying weapons to join the army or the police force,” he said. “There are (also) the unemployed, and they will be invited to join the standing army.” One theory swirling around Tripoli said that many top Gaddafi people were hiding at the Rixos hotel. The Rixos is surrounded. “There are ministers inside from the Gaddafi regime. They have taken the TV people prisoner,” a young fighter said. Osama Mohamad, a marine scientist, said he had been disappointed by Britain’s close relationship with Gaddafi, and by the invitation to Libya’s ambassador -subsequently withdrawn- to attend Prince William’s wedding. ‘Gaddafi’s been a dictator for 42 years. I don’t accept it. I accept it from Italy but not from Britain,’ he said.”. The media added: ” Poverty is one of the key factors behind Libya’s “February 17” revolution, in a country with the largest oil reserves on the African continent. At one rebel checkpoint yesterday a group of militia volunteers were sitting on a superior black leather sofa. They had get it from a nearby flat and parked it on the pavement. They had also helped themselves to a coffee table. “In our home we didn’t have anything like this,” Nadami, 30, explained, pointing to his new suite. “Gaddafi has many expensive things. He spent our money on parties and buying guns.” Nadami said he worked as a dentist and lab technician; he showed off a 10mm revolver he had seized on Tuesday from Gaddafi’s compound. “I was there. We found many, many guns,” he said” 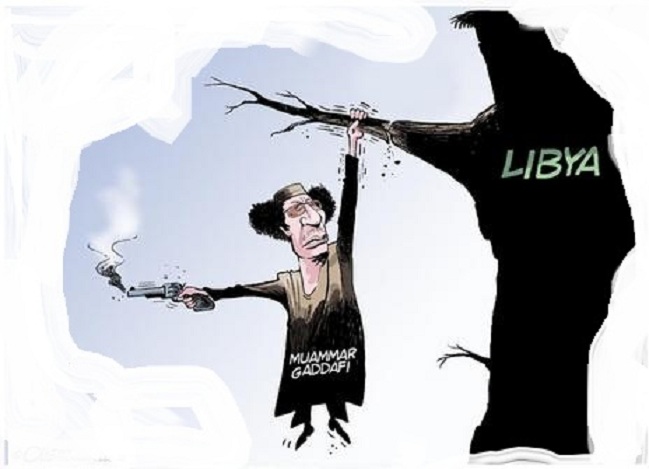 “Around 35 journalists and diplomats have been freed from the Rixos hotel . The media reported: “Their release was negotiated by the International Committee of the Red Cross, who ferried the journalists to another hotel elsewhere in the city. “It’s a new Tripoli, a happy Tripoli, very different than the one I saw a week ago,” said a CNN producer who was among the journalists held captive at the hotel. “It has been an absolute nightmare for all of us,” said Matthew Chance, a CNN reporter after the group reached the relative safety of another hotel in an
opposition-controlled area of the city. “Emotions are running very high. We had all sorts of paranoid scenarios running around our minds. Awful worst case scenarios that we were going to be used as human shields; that we were going to be executed by some lunatic hardliners”, said Chance. The captives were sleeping together on the floor of one wing of the hotel for safety. Chance explained how they created a safe-room in a windowless prayer room that they hoped would be safe from shooting and blasts. “All this, while we were absolutely terrified that the mood was going to change and we would be shot,” he said. “[The gunmen] blamed the international media. One of them shouted up to me yesterday: ‘Hey I hope you are happy now Libyans are killing Libyans.’ My room was smashed into the door was kicked in, my stuff was rifled through by Kalashnikov-wielding hoodlums. There was a ferocius battle I spent at least 36 hours on and off lying on my belly in a dark room.” He said snipers were shooting through the hotel. “Reality slowly dawned on these people and today they capitulated to the 36 journalists in the hotel,” added Chance. “They handed over the weapons and they were put out of use and they said there’s no problem, we are going to let you go.” The five cars sent to collect the captives sped away through a series of rebel check points, some packed with seven or eight people in each. “The feeling of the weight, this pressure lifting off us as we drove further and further away from the Rixos hotel was great,” said Chance.” The media also added: “At the UN, US, British and French diplomats were drafting a resolution ordering the unblocking of $1.5bn (£900m) in frozen Libyan funds at the beginning of the war. The NTC’s priority is to secure a speedy release of funds frozen abroad, which would help to strengthen its legitimacy in the eyes of ordinary Libyans. The NTC sent a stream of text messages today through the mobile phone network to police officers and civil servants, urging them to carrying on working as normal. Of the total funds frozen , $37bn is in the US, $20bn is in Britain and about $7bn is in Germany.”

This entry was posted on Thursday, August 25th, 2011 at 6:01 pm and is filed under Revolutions of 2011. You can follow any responses to this entry through the RSS 2.0 feed. Both comments and pings are currently closed.